"Howdy ho! My new movie is out! You should go see it!"

I love Nickelodeon’s Avatar: The Last Airbender so much that if I knew the TV show in person, I would tell it I lurve it.  (I have a very difficult time saying those three little words.)

So in the case of the film, I had high hopes.  I mean, how could anybody screw it up?  There’s enough material to reference, enough characterization and plot to build on, only a hack could fuck it up.

M. Night Shyamalan officially became a hack.  In other words, he was once The Shit and now he’s plain ol’ Just Shitty.  Could we (or namely, I) have seen the Signs?  Let’s take a quick peek at his past work… from my perspective, of course.

Nobody knows anything about this film.  And by nobody, I mean me.  I heard decent things about it at the time, but I never saw it.  Probably because this was the poster: 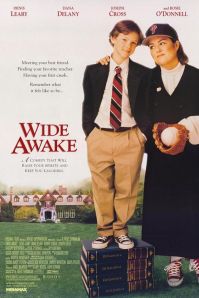 Rosie O'Donnell as a nun that likes baseball? No thanks.

I was backpacking in Europe when this movie was released (douchebagging), and on a weekly basis, I was surprised at its success back home.  (I learned this from newspapers… remember those?)  So upon getting back to the States, I made it a point to check this flick out, full well knowing there was a twist, but not yet knowing what it was.

While the ending approached, I remember thinking:

Hmm.  This was pretty good, but not great.  Did I miss the twist?

When the ring dropped on the floor, I put it together myself (and then the film needlessly did the same).  I was entertained and mildly impressed, until I saw this article on Cracked.  Did you know there was an episode of Nickelodeon’s Are You Afraid of the Dark? that was pretty damn close to the Academy Award-nominated story?  But it’s not like Shyamalan ever watched the kids channel, right?

I lurved this film.  More than everyone else loved The Sixth Sense, even.  And why?  I’ve always believed that if someone ever figured out how to be a superhero (or villain), someone else would figure out how to be the opposite.  It’s a theme that’s been explored by The Incredibles and The Dark Knight, and this movie swam through the motif like a motif-swimming sea animal.

The pacing was great; the framing of the scene where Bruce Willis’ son pulls a gun on him was fantastic.  Could the end result merely be because a thin Twilight Zone premise had to be stretched out into a longer format?  Discuss.

For the record, though, I still lurve this movie.  Maybe a re-watch is required.

A movie about crop circles and the inevitable alien invasion could have been good.  Hell, there are even parts in this flick that could qualify as memorable, well-executed scenes (the figure on top of the barn, the birthday video, the basement sequence).  But one could argue that the first half of X-Men: The Last Stand had its moments, and that still wouldn’t make the overall project a win.  The same thing goes for Signs.  Everything it was working for was unraveled in its last minutes (just like fucking LOST), and it ultimately left a bad taste in my mouth.  Does anybody have a glass of water, by chance?

(SIDENOTE: I would have fixed the finale by never showing the alien.  I would have had Mel Gibson facing the creature off-screen, and only shown it in the reflection on the TV, and maybe in a quick flash.  Seeing the “man in an alien costume” and the entire “swing away” bullshit was stupid and lazy, simply put.)

A lot of people absolutely hated this movie.  It was also one of the first movies I lost a shit-ton of money on in the Hollywood Stock Exchange. I was in the minority of people who didn’t mind it.  There’s a story I’ve always wanted to write that’s not too far off this premise (no monsters in mine, thank you), so that upset me.  And by the time Shyamalan popped up in the twist ending, I was with the majority of people who thought

But I’ll admit that it tricked me.  People that saw it before me told me it was more of a romantic story than a supernatural thriller, so when the creatures showed up, I was suspicious.  They were revealed as fake, and I felt vindicated.  Then there was a chance they were real, and I bit.  All-in-all, hardly a classic, but hardly his worst.

His worst, on so many levels… I don’t know where to begin.  That was at least until…

I saw this movie, too.  This had to be his worst, right?  Wrong again.

Why did they let him touch this beloved, though not widely known, series?

I’m beginning to think that M. Night Shyamalan shares the same gift as the Detroit Lions.  They are both incredibly adept at getting your hopes up and getting you to continue believing in them.  And that’s the greatest twist of all – the one you feel in your nutsack when they disappoint yet again.

(SIDENOTE: I really do think the Detroit Lions have a decent shot at being good this year.)