I’m a big proponent of human interaction.  But I am also a borderline misanthrope.

So I guess I’m all about everybody talking to each other so long as they don’t talk to me.

That being said, I can’t stand small talk.

Why does it always have to be about the weather?  (Click here for Stormy Rain Clouds.)

I suggest we make light of various surroundings, like I did one day.  This cute girl and I were waiting for an elevator, so I mentioned how convenient a giant slide would be in traversing floors… at least going down: 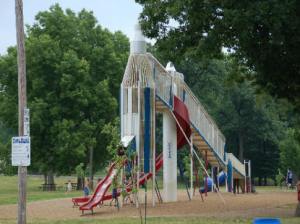 When Darwinism ruled the park scene...

She thought that a fireman poll might be better, and I agreed:

We got on the elevator as another couple approached.  I asked what floor, and they remained captivated in their own world.

I shrugged and the girl smiled.

See, why couldn’t it be like that all the time?  Repartee… flat-out ignoring…

…and the cute girl part?

That helped a little bit.

Make that a lotta bit.

Criminy.  In the course of working on this post (which I thought was going to be a nice break from all the work on the Final Foursome brackets – NOT!), I started to feel like Nick Cage in 8mm.  The further I started digging, the dirtier I felt… which happens when you actually dig.

And maybe I’m exaggerating my Nick Cage analogy.  Perhaps it was more of a National Treasure debacle, where one clue lead me to another, until my head started spinning.

Regardless, I stuck to it (courtesy of my stick-to-it-iveness, which bears no association with nocturnal emissions).  These are my findings…

The idea for this post was a sort of fruitful one; variations of it jumped at me from every direction.

The concept: LIBERAL BORROWING, a.k.a. STEALING, in the music business.

Then that lead me to…

And then came this thought…

Then my mind wandered to this revelation…

Lady Gaga and Beyonce’s new song, Telephone, has been driving me freaking crazy, and not for the expected reasons.

At the 3:33 mark in the NSFW extended video (or the 0:47 mark in the regular video according to other TripleDoubleU inquiries), her line:

Sounds just like another song, the likes of which I could not think of.  I scoured the web and scrambled my brain.  I started getting Britney Spears’ 3 stuck in my head, and couldn’t get past it.

Once I found out Gaga actually wrote Telephone for Spears, the mental block worsened.  I had a feeling it was one of those backup singer hooks from all the early Aughties’ R&B hits.

I searched song lists of Mya, Ashanti, Aliyah… then it occurred to me: Ciara’s Goodies (at the 1:24 mark).

Looking for the goodies, keep on lookin’ cuz they stay in the jar…

Excitedly, I returned to the website where someone else shared my pain.

I hit the “Comments” button to answer…

…and somebody else already had.

(BONUS WEIRDNESS!  Both Ciara and Lady Gaga have been rumored to be hermaphrodites!)

THE WILD CARDS (Round 1 Results)

– Considering the licks the rest of the Seinfeld gang took (save George), it was of little surprise that Cosmo Kramer (#1) was defeated by Miranda Hobbes (#16), 48-23.  (This was the largest vote turnout of all.)  For those keeping tabs, Seinfeld has one representative; Sex and the City has two.

– The next one would have been a tough choice for me, but it wasn’t as close as I thought.  Winston Zeddemore (#13) blasts H.M. “Howling Mad” Murdock (#4) with a 17-10 win.  The Ghostbusters join The Beatles and the South Park kids, with the entire foursome making it into Round 2; The A-Team has two.

– Another Sunny character, and the inspiration for this category (actually, this entire Awesome Battle was inspired by the Sunny crew), Charlie Day (#5) walks away with a victory against Mike Nesmith (#12), 26-12.  Make that two for It’s Always Sunny in Philadelphia, and only one for The Monkees.

– The Human Torch (#6) barely blasts past Ellen DeGeneres (#11), 11-9.  There’s only one rep each from The Fantastic Four and the American Idol judges. 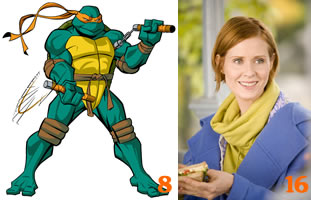 (more after the jump) END_OF_DOCUMENT_TOKEN_TO_BE_REPLACED

The Round Outs bracket had a few surprises, and a couple of blow-outs.  Plus, it allowed some foursomes to be represented for the first time, and it marked the third winner in a row for some groups.

THE ROUND OUTS (Round 1 Results)

– Eric Cartman (#1) continues South Park’s success at making it to Round 2.  He defeated Laa-Laa easily (at the time of this posting), 29-1.

– Another bracket champ so far!  Egon Spengler (#8) makes it three Ghostbusters still hanging in there.  He defeats The Thing (#9), 15-5.  Things aren’t looking too fantastic for the Marvel heroes.

Now let’s move onto Round 2!

(more after the jump) END_OF_DOCUMENT_TOKEN_TO_BE_REPLACED

THE SECOND BANANAS (Round 2 Results)

This bracket provided only one upset.  Much like in the Head Honcho bracket, my love of It’s Always Sunny in Philadelphia did not transcend to your votes.  Or perhaps I underestimated the Scarecrow’s fan base.  Either way, The Wizard of Oz had enough heart to give, and the Scarecrow (#13) beat Mac (#4) overwhelmingly (at the time of this posting), 41-9.

Here are the other voting results (two were very close, one was a blow out):

Round 2 of the Second Bananas might contain some of the toughest match-ups.  Let’s go! 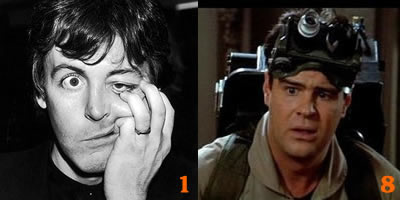 (more after the jump) END_OF_DOCUMENT_TOKEN_TO_BE_REPLACED

Some of these upsets I did not see coming.  But just like the NCAA tournament system this is based on, upsets are what make it interesting.

THE HEAD HONCHOS (Round 1 Results)

– First dead Beatle John Lennon (#1) was pitted against the biggest Teletubby, Tinky Winky, and rightfully so, Lennon won (at the time of this posting), 34-15.

– Moneybags/sour puss Simon Cowell (#2) lost in the first upset of the competition to the Entourage’s nougat center, Vincent Chase (#15).  Not quite a blow-out at 27-17.

– There must be a fair amount of animosity being held against Jerry Seinfeld (#3) for his awful Marriage Ref show.  I didn’t think enough people would remember The Monkees, let alone the group’s breakout heartthrob, Davy Jones (#14) to help him scrape by a win at 24-21.

– This one breaks my heart a little bit.  Maybe if the movie remake was already out (and it didn’t suck), John “Hannibal” Smith (#5) would have defeated mushroom-addict, Mario Mario (#12).  Instead, the double-monickered one won, 19-13.

– This battle was upsetting to me.  I love It’s Always Sunny in California, and I’m rather indifferent to Sex and the City.  For those that voted, the opposite must have been true.  Carrie Bradshaw (#9) beats Dennis Reynolds (#8), 26-19.

With that being said, onto round 2! 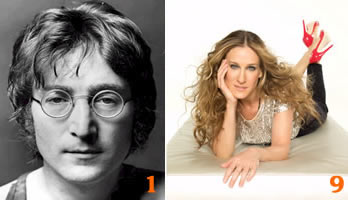 (more after the jump) END_OF_DOCUMENT_TOKEN_TO_BE_REPLACED

"Allow me to introduce you to such vile things!"

Ever see the movie Nacho Libre?  My friend recently told me his young sons love it, but it bothers him because it uses two bad words: floozy and douche.

This got me thinking about the etymology of the word – specifically douchebag – and how it’s beginning to feel like its power is waning.  And I’m not suggesting that those people being dubbed one are accepting it, like how the cast of Jersey Shore adored being called guidos.  It’s just that it seems like everybody’s a douchebag these days, and they can’t all be one, can they?

According to the always reliable Wikipedia, the feminine hygiene product became an insult in the 1960’s.  According to Stephen King (or the other screenwriters), the word was well into play by September 1959.

From Stand By Me:

Chris: Yeah. So lets just say that I stole the milk money but old lady Simons stole it back from me. Suppose I told the story. Me, Chris Chambers, kid brother to Eyeball Chambers. Do you think anyone would have believed it?
Gordie: No.
Chris: And do you think that that bitch would have dared try something like that if it had been one of those douchebags from up on the View, if they had taken the money?
Gordie: No way!

The meteoric rise in this useful word’s, um, use has to deal with either one of two things:

My biggest fear is that by throwing around this word so willy-nilly (a phrase that has earned tons of power from disuse), douchebag will become as dull as idiot, moron, or crystal and clear in the early 90’s.

In closing, here’s an excerpt from an insightful article on Overthinking It.  Author (a.k.a. blogger) mlawski posits:

“Patriarchal tools,” hmm?  Well, there are plenty of them around.  Tons you might say…

Well the answer to all the above questions is “Reply hazy, try again,” at least according to my Magic 8 Ball.

Nonetheless, this proud group consists of those that are a lot like a Magic 8 Ball.  You never know what they’re going to do or say… within their limits.  Or you flat-out don’t understand why they’re there.  Kind of like, why make an eight ball magical? 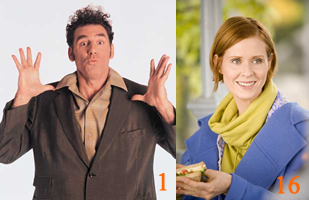 (The rest are after the jump) END_OF_DOCUMENT_TOKEN_TO_BE_REPLACED

Welcome to the Round Outs bracket in the quest to assemble the greatest Final Foursome.

These are the players that “round out” each of their respective groups.  They’re the brains, the brawns, the beauties, the talent, the bullies, the Born Again, and the, um, yellow.

(The rest are after the jump) END_OF_DOCUMENT_TOKEN_TO_BE_REPLACED

In a quest to find the greatest foursome composed of members from many foursomes, here’s the appropriately titled second bracket, Second Bananas.  These are the guys and the gals that make the Head Honchos look like head honchos.  If it was in their nature, they’d be at the top… but they don’t feel like it.

Stayed tuned for the Round Outs and Wild Cards brackets.

(The rest are after the jump) END_OF_DOCUMENT_TOKEN_TO_BE_REPLACED