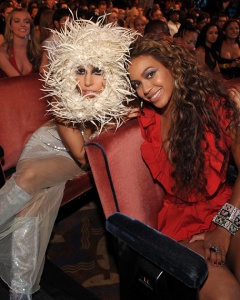 Criminy.  In the course of working on this post (which I thought was going to be a nice break from all the work on the Final Foursome brackets – NOT!), I started to feel like Nick Cage in 8mm.  The further I started digging, the dirtier I felt… which happens when you actually dig.

And maybe I’m exaggerating my Nick Cage analogy.  Perhaps it was more of a National Treasure debacle, where one clue lead me to another, until my head started spinning.

Regardless, I stuck to it (courtesy of my stick-to-it-iveness, which bears no association with nocturnal emissions).  These are my findings…

The idea for this post was a sort of fruitful one; variations of it jumped at me from every direction.

The concept: LIBERAL BORROWING, a.k.a. STEALING, in the music business.

Then that lead me to…

And then came this thought…

Then my mind wandered to this revelation…

Lady Gaga and Beyonce’s new song, Telephone, has been driving me freaking crazy, and not for the expected reasons.

At the 3:33 mark in the NSFW extended video (or the 0:47 mark in the regular video according to other TripleDoubleU inquiries), her line:

Sounds just like another song, the likes of which I could not think of.  I scoured the web and scrambled my brain.  I started getting Britney Spears’ 3 stuck in my head, and couldn’t get past it.

Once I found out Gaga actually wrote Telephone for Spears, the mental block worsened.  I had a feeling it was one of those backup singer hooks from all the early Aughties’ R&B hits.

I searched song lists of Mya, Ashanti, Aliyah… then it occurred to me: Ciara’s Goodies (at the 1:24 mark).

Looking for the goodies, keep on lookin’ cuz they stay in the jar…

Excitedly, I returned to the website where someone else shared my pain.

I hit the “Comments” button to answer…

…and somebody else already had.

(BONUS WEIRDNESS!  Both Ciara and Lady Gaga have been rumored to be hermaphrodites!)