I know I’m not the first to notice this, but are you noticing a trend?

Keep your sights on the bulls-eye…

First, Katniss has her way with the bow and arrow in The Hunger Games, then Hawkeye shows up as a master archer in The Avengers, and finally Princess Merida goes all Robin Hood in Brave.  Kinda weird, right?  Like Hollywood’s prepping us for Armageddon by developing a fondness for rudimentary varieties of arsenal.

But like I said, I unfortunately was late to the (hunger) game catching that one, so howzabout this Coinkydink or Coinkydonk… the flying vessels the Chitauri use in The Avengers are similar to the flying disks in Masters of the Universe movie: 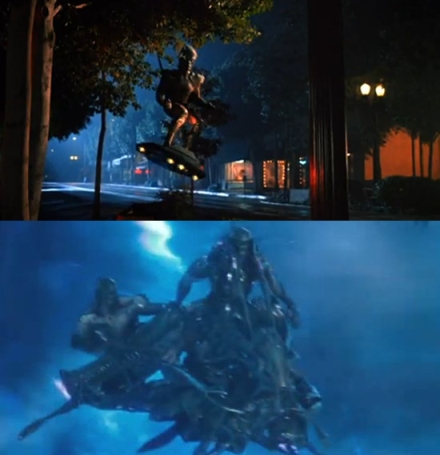 What about the Chitauri Leviathan, then?  It looked comparable to those Decepticon ships in Transformers: Dark of the Moon, right?

Yeah, this one’s a bit better… let’s go for one more COC!

Remember how it looked for Tony Stark inside the Iron Man suit?