Gather ’round, gather ’round, kiddies… it’s time for another one of Uncle Sean’s drunk stories… this one is about a Halloween party where I learned a hard life lesson…

I consider myself a cardboard specialist.  Sort of a masterboarder, if you will.  Two examples:

Get it? Duck-Duck-Goose! Ah, go duck yourself. 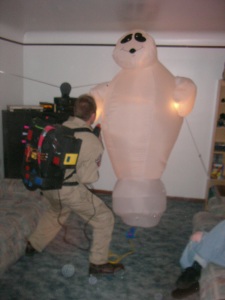 A Halloween or two prior to that, I studied my “Ghostbusters” accessories, and mocked up a poor man’s version (a.k.a. child’s version) of their Proton Pack to go along with my tan jumpsuit and patches.

My talent first revealed itself to me a Halloween or two prior to that one.  (There was one party in the middle where I grew out my beard and hair and went as Tom Hanks in “Cast Away.”  I was going to follow-up as Robert Duvall in “THX 1138” the next year by shaving my head, but I went on vacation instead.  As if you cared.)

The event that birthed my boardery occurred at a private gathering in the basement of a hall.  Upstairs, a wedding reception was held, and upon walking through the front doors of the hall, the groom exclaimed, “Optimus Prime!”

Michael Bay, eat your heart out.

He didn’t yell to Uncle Jay, “Starscream!”  He yelled the character I was playing.  (Although he did also shout “Dogma!” when he saw Uncle Chris dressed as Matt Damon in the film – he was a wingless angel in armor.  Nerd!)

Later in the night, prior to the police arriving to break up the Halloweed festivities, a group of us would eventually make our way back up to the reception to seek out more alcohol.  There’s video somewhere out there of Optimus Prime and Starscream dancing with the bride and bridesmaids.  But that’s not what this tale’s about.

Despite the fact that Jay and I won Best Couple (again, before that whole cop crackdown thing), there was a bitter Energon cube I was forced to swallow.  While talking to a pair of G.I. Janes, my good old buddy was getting all the attention.  I blew up.  “I’m the leader of the Autobots,” I began.  “Starscream doesn’t lead anything.  In fact all he does is whine to Megatron.  It’s his wingspan, isn’t it?  It’s always about the wingspan.  Don’t lie and tell me differently.”

Thank Cybertron the boys in blue cancelled the show.

MORAL OF THE STORY: No matter what you do, no matter how much you accomplish in life, girls always love the bad boys.