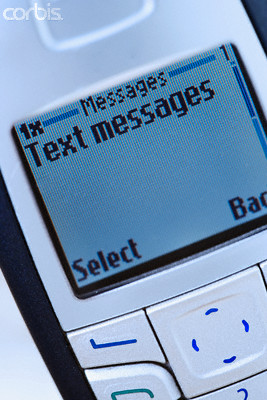 So far this year, I’ve received four Christmas cards.  You should know that I don’t send any out, but it hasn’t stopped people from sending them to me in the past.  And it’s not that I’m hoping for them, or judging anyone for sending or not sending me one.  I’m only bringing this up because I received more text messages this Christmas than other years (only ten so far… and maybe counting).

I wonder if the economy has anything to do with it.  Or simply it’s a reflection of my Yulitude.  But they’ve all been pretty much the same old…

…which is no doubt a mass texting.  Again, I’m not knocking the fact that people are thinking about me when they’re going through their phone list (or address book in regard to the carders), it’s just that my sentimentality begins and ends with “It’s a Wonderful Life!”

At least with text messaging vs. cards, I can appear thoughtful with the forwarded response…

…but again, it feels lacking and tacky.  Maybe next year, I’ll try to be the one wishing all a Merry Christmas first, and see how many responses I get.  (I’ll have to make sure my phone plan allows for that many responses.)  I’m already thinking about the shorthand text I could send.  Perhaps…

…can do the trick.

I wish I had a million dollars! No, I really mean it...

My favorite film of all time is “It’s a Wonderful Life!”

Call me maudlin, call me a tool, call me a sap (which would render me a sentimental tree tap?)  Okay you can add “lame” to that list, but if you do not agree, you may need to give the flick another look.

The story of a man unknowingly fulfilling his destiny is a classic unparalleled.  There are some moments so honest in the film that I wish cloning existed to give us another Jimmy Stewart and Donna Reed.

The reason I bring it up today (besides the obvious Christmas ties) is to tie it to another one of two other subjects:

For those of you unfamiliar with the independent cut-scenes from a video game film, here’s the preview:

The ties between films are as follows:

Okay, there’s not much of a connection between them, and if I ever see “Delgo,” I may be hard pressed to expand that list.  The biggest purpose for bringing the creepy CGI film up is because the production breaks my heart.  On it’s opening weekend, the movie averaged two viewers per showing.  Two.

…the making of “Delgo” has the makings of a great Hollywood underdog story. 36-year-old entrepreneur Marc Adler decided he wanted to direct and produce a $40 million computer animated kids’ flick completely independent of Tinseltown behemoths like Disney and Dreamworks.

…And when Adler couldn’t get a Hollywood studio interested in his movie, he raised eyebrows by releasing it himself through distributor-for-hire Freestyle Releasing. It was a huge risk; one that ultimately didn’t pay off. There wasn’t the sort of marketing budget needed to make a film stand out in the already crowded holiday movie season.

Okay, it doesn’t help the movie received horrible reviews, and its main stars were Freddie Prinze, Jr. and Jennifer Love Hewitt, but–

Wait!  There’s another correlation between the films:

I’m beginning to suspect that this cable access feature from the 90’s might have come from the archive of Michael Bay’s earlier works.  Notice the quick editing and flashy zooming jump cuts.  The action and the mystery never takes a break.

I’m fairly certain this inspired “Bad Boys.”  Compare the clips and see for yourself.