"So what's it about?" "Well, it's a whole movie about the opening scene of Lethal Weapon. Except it's a dude. And he's clothed."

Man on a Ledge may actually be a good film, but at first glance, it seems like a dumb idea.  (Not as dumb as this idea.)

(SIDENOTE: The strangest reaction I get from the previews is that I feel like I kind of missed Sam Worthington being in a movie.  It should be noted that this is not because of Avatar or any one of the 100 other flicks he made in the last two years… it’s because of a silly video game commercial.)

This got me thinking about other dumb movies that had dumb ideas and should have never been made (again, not saying Man on a Ledge shouldn’t have been made, but really), and here I’ll rank them from The Shit to Just Shitty.  I saw every one of these in the theater.  I paid to see them.  Minimum wage pay in most cases.

(SIDENOTE: The alternative to this diatribe was about people trapped in situations and things, but I already did that once before.  So moving on…)

Not about ice cream.

This film being ranked as The Shit comes out of nowhere, pretty much like a tornado.

Twister is one of those films that was made mostly because it could be made (CGI effects were getting better).  Aside from the graphics, it introduced cow as a catchphrase (effectively replacing Bart Simpsons’ famous cow quote).  There are TV shows based around storm chasers these days, so there’s something to its premise.  But then again, there are also shows about lady hoggers.

Not about a spelling bee.

I almost placed Arachnophobia at the top because of this scene:

I remembered it being better.  But then again, I was only 15.  Oh, if you couldn’t guess, this film was about spiders.  Bunches and bunches of spiders.

I like their use of yellow. It reminds me of urine.

If you stop and think about it, I paid to see not only a Jerry O’Connell vehicle, but a David Arquette one, too.  What was I thinking?

Tomcats was about a group of friends that were in an eternal struggle to be the last bachelor (to win a wager); Ready to Rumble is about two wrestling fans that try to help their favorite wrestler regain his championship title.  Sure, neither of their ideas are as obviously dumb as the previous two, but… I’m mostly embarrassed I saw these Pieces of Shit at the theater, hence their inclusion here. 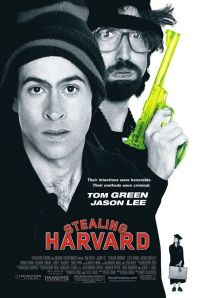 They should have tried to steal the University of Phoenix.

Jason Lee.  Tom Green when people knew who Tom Green was.  One of the Kids in the Hall directing.  Stealing Harvard should have  made me laugh, but instead, it stole my money.  The premise is simple: an uncle resorts to thieving to raise money for his niece’s tuition.  No comedy ensues.  This remains to be the only film I’ve ever walked out on.

Even my love for Olivia Wilde couldn’t make me like this abysmal so what? of a movie.  If you guessed that it’s about cowboys fighting aliens, you’d be right.  You’d be right about everything you’d guess.

(SIDENOTE: Dear Olivia, I approve of Jason Sudeikis, at least until we meet.)