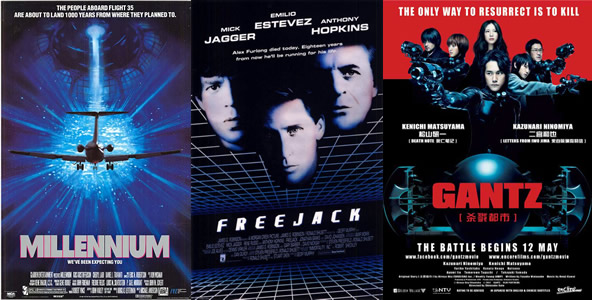 This is the first of the films in which characters about to die are sucked from their impending doom and thrust into a surreal reality, or surreality™.  As you can see from the poster above, this one involves a plane.  Well, two planes.  And they’re about to crash into each other.  But all the passengers are already dead.  Because they were see the first sentence. It’s not the greatest film in the world, but if you enjoy Cheryl Ladd and Kris Kristofferson looking like this…

...then this pic's for you. Well, not this picture. I mean the motion picture. But I guess you could have this pic, too.

The second film featuring a surreality™ doesn’t give away as much in the poster, other than its odd cast.  You might think the flick has to do something with virtual reality, which is strictly The Lawnmower Man’s territory (no it’s not), when in fact it deals with a man (Emilio Estevez) being pulled into the future before his race car crashes.  The reason why?  Sir Anthony Hopkins wants his body.  Seriously.  Estevez escapes and becomes a Freejack (aha!), and is chased by Mick Jagger looking like this:

If you enjoy subtitles and odd sci-fi action spread out over two movies, then these Japanese films are for you.  I haven’t seen the sequel yet (Gantz: Perfect Answer), so I don’t have any answers, perfect or otherwise, as to what the Gantz is.  Well, it’s a dude inside a giant black ball that pulls the almost deceased into a surreality™ where they dress up in rubber power suits and set out to kill a vast array of strange aliens.  Here’s a taste:

Natsuna Watanabe is easy on the Gantz.