This might be the hardest one yet.  (Why do I have a feeling that will always be the feeling?)

I’m about speak In Defense Of… 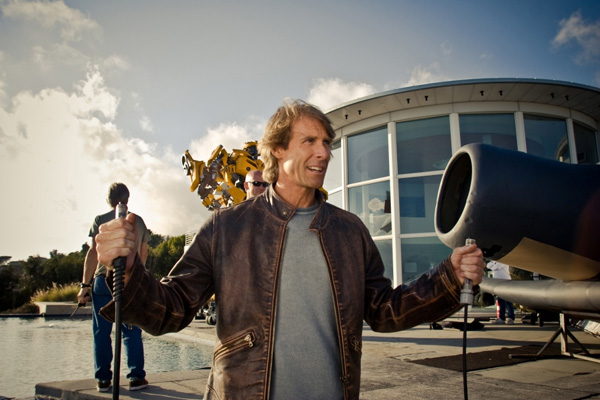 "I get bold, italics, underlining, periods, and fucking? Boom goes the dynamite... and everything else!"

I didn’t think I’d get here so soon, but it’s befitting since Transformers: Dark of the Moon is finally here.  I haven’t seen it yet, but more on that soon.

Where can I begin my defense?

But that argument can be countered by pointing out how shaky the fight scenes were in the first two Transformers films, or how explosions stand in for plot progression.  Another issue is his childish – nay – infantile sense of humor that leaks through into his films (peeing robots and robots with balls, for example).

Do they?  Do they really?  Or is it the spectacle as mentioned above. Let’s run through his catalog real quick, accompanied by Rotten Tomatoes’ aggregated ratings:

How many are technically great movies?  The Rock?  How much of that was due to Nick Cage, Sean Connery, and Ed Harris, though?

And don’t get me started with his production company, Platinum Dunes.  They’re responsible for most of the crappy horror film remakes that have come out in the last eight years.  So no… it’s not that people really like his movies.

He’s the eighth highest domestic grossing director up to 2009 for a reason.   Hell, I have to admit I’ve seen every single one of those movies above at the theater except the latest one, and I can’t wait to see it this weekend!  It looks like the special effects are really cleaned up, and I’ll be able to tell what the Transformers are doing!  I’m probably even going to pay extra to see 3D, and I typically hate 3D!

I know I’ve talked shit about him many times before, and I probably will in the future, but my biggest defense for him is that he gets people to the theaters.  That’s his job and he does it well.  Once we’re there, well, that’s a different story about story and content.  But I’m usually content.  I don’t hate his films with the same ferocity I unleash on Brett Ratner’s greasy prints or  M. Night Shyamalan’s twit-twisters (I avoid their films like the plague).

Being a flawed storyteller doesn’t make him bad.  If that was the case, I’d bitch about Tim Burton more often.

(SIDENOTE: If I can’t get convince you with any of the above, then you should know this.  When he was a kid, he donated all his Bar Mitzvah money to a local animal shelter.  That’s something.)