For this small list, I wanted to highlight the non-canon, non-superhero superheroes of modern cinema.  And I’m not counting anything like Darkman, Blankman, Meteor Man, or My Super Ex-Girlfriend.  Some of these entries are obvious – some are not.

Look!  Up in the sk– over there!  It’s A Handful Of Non-Superhero Superhero Movies! 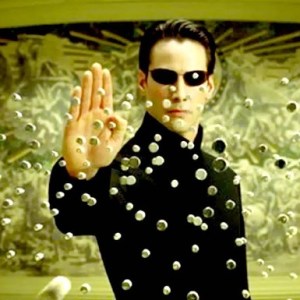 "There may be no spoon, but that's a lot of bullets!"

The Matrix as a stand-alone film is a story similar to the recent Green Lantern movie.  Whereas Hal Jordan was found by Abin Sur who explained he was “chosen,” Neo was found by Morpheus under the same pretenses.  Until Hal/Neo believed in himself, he wasn’t quite the hero he was destined to be.  Also, Neo’s code-vision was green.  Mjusayin’. 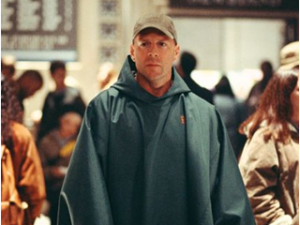 "I know things others don't. It's like a sixth sense."

Like Thor, David Dunn was always a god… he just didn’t know his full potential.  And in a series of (destructive) moves that would make Loki proud, Mr. Glass pushed David to find the hero he could be.  Even though it’s an M. Night Shitamalan flick, I’m still awaiting the sequel.

Swamp Thing is about a scientist, Dr. Alec Holland, who is filled with good intentions that ends up becoming one of the swamp things he’s trying to protect; Wikus van de Merwe isn’t as noble as Dr. Holland, but as he becomes one of the “prawns” he’s trying to relocate, his selfish actions end up leading to (hopeful) liberation for all.  Waiting on this sequel, too.

Stephen King is probably better at writing Non-Supervillain Supervillians (Firestarter, Carrie, Cujo, Christine), but The Dead Zone is kind of the exception.  After waking from a coma, Johnny Smith develops the ability to see the future of anyone he touches.  Upon shaking the hand of a senator, he becomes determined to assassinate him because of all the ill he’ll cause the world.  In this way, he’s a lot like The Punisher – an anti-hero vigilante that’s kinda creepy. 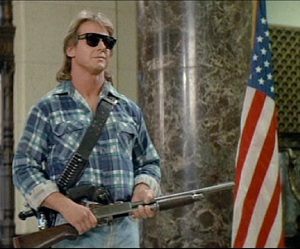 "I came here to kick ass and chew bubblegum, and I'd really like some bubblegum."

Batman may have had a bunch of gadgets to help him make the world a brighter place.  All Nada needs is a pair of sunglasses.  And a shotgun.  And like he says above – some bubblegum.

Come on… they really fit all four of those girls the same?!  It must be made of unstable molecules just like the Fantastic Four’s costumes.