This is a new category I’ve thought about for quite a while, so I guess it’s only technically new to you.  I’ve only had this blog for two and a half years, so these are my imaginary blog posts from the past.  This one takes place in 2004. 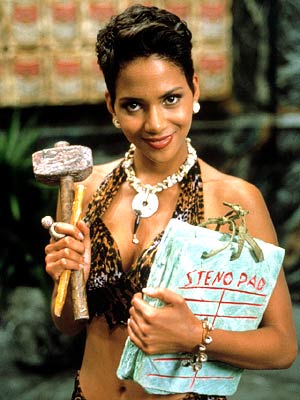 A steno pad made of rock? Didn't they have animal skin to write on?

– Remember when everyone was making a fuss about Halle Berry playing a character named Sharon Stone, in The Flintstones live action film?

– Remember how the part was supposed to be played by the real Sharon Stone, but she backed out to be in Diabolique?

– Remember how they thought about changing her name to Rosetta Stone, but the producers were afraid people wouldn’t get the reference to the key that unlocked ancient languages?

– Remember how Halle Berry celebrated the fact that they didn’t change the name?

– Remember how Sharon Stone regretted not taking part in the film?

Well, you probably don’t since that was ten long years ago, back in 1994.

Now it’s 2004, and Sharon Stone is about to get her revenge against Halle Berry in Catwoman (which looks awesome BTW).  Stone plays Laurel Hedare, the head of a cosmetics company Berry’s Patience Phillips works at.  I heard there’s a great fight scene between them, but seeing as how difficult it is to put videos on the TripleDoubleU at this point, you’ll just have to imagine what it will be like.

I heard that the same kind of thing when down during the casting of Office Space: