I’ve mentioned it before (here and here), and I’ll mention it again – I have a very short list of serious fears.  Irrational?  That list would go on forever.

I’m really beginning to rethink that order because there’s a certain type of aliens that might be the worst.  But I’ll get to that in a second.  Here’s the preview for what I might find the scariest movie ever made!  Oh yeah… it’s called Dark Skies:

I can’t find the newest preview (nor do I really want to try that hard), but in that one, it seems that this film is about BEK’s.  That’s short for Black Eyed Kids.  Oh, I wish I could make a joke about the Black Eyed Peas right now, believe me.

You can click here for a Google image search of them for your own, but an image search alone won’t do it justice.  Howzabout a couple of stories from the ol’ TripleDoubleU to unsettle you in…

These strange Black Eyed Children, who can appear or vanish at a moment’s notice, seem to be between the ages of 8 and 16. Their skin is pale or pasty colored, described by some as looking plastic or artificial, and their mannerisms are odd. Witnesses describe their clothing as odd and drab – blue jeans and a hoodie or very old-fashioned, handmade clothing. Bizarre electrical phenomena occurs when they are around, such as a garage door inexplicably opening.

Jason Offutt, another researcher into the Black Eyed Children phenomenon, gives this account:

There are plenty more stories out there.  I simply can’t bear anymore.

I am not a fan of Depeche Mode, but this family from Columbia sure is.  After watching these, I heard Enjoy the Silence on the radio, and I couldn’t help but smile.

(SIDENOTE: When I was in high school, um, let’s see… 20 years ago… I remember this one girl gave a speech in our Honors English class about how squids are people, too.  I thought, “Squids aren’t people.  They’re squids!”  Apparently, this is what they called goth back in the day at my school, and squids liked Depeche Mode.  Don’t worry, I know what you’re thinking – He took Honors English?!)

My original plan for this post was to write about a collection of strangers I made up stories about while at a concert.  There was:

But instead of doing what I just did, I decided to share some Laffy Taffy jokes my siblings and I made up while driving from Chicago to Detroit in two different cars.  Enjoy! 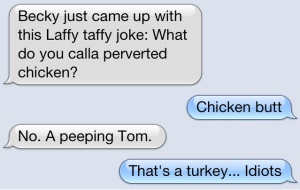 Not a very polite beginning, but a beginning nonetheless. 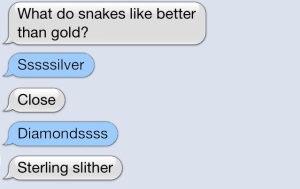 I was not involved in this one so I had to make color alterations.

You see, my sister had this tobacco moth on her tomato plant. It was disgusting… and a terrible guess. 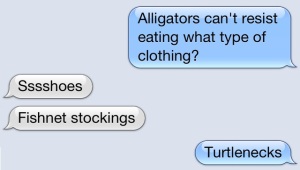 All acceptable guesses. But only one is right. 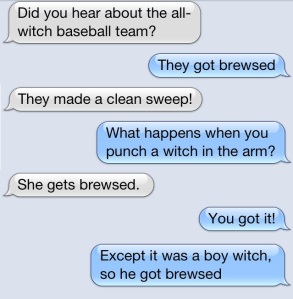 It should have been a stamp talking to an envelope, but that Laffy Taffy joke probably exists. Hence, convention was turned on its head.

This was in reference to me making everybody guess my favorite Wang Chung song. 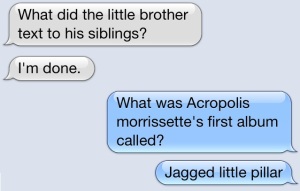 I’ll admit it.  I watch Cartoon Network.  That’s where I catch all the latest Clone Wars episodes (not for much longer, though).

It’s also where I catch-up on the latest and greatest toy offerings.  Of all the dumb things I’ve seen, I couldn’t believe that this (post from two years ago) has officially made its way here:

This toy from Britain?

(SIDENOTE: Wow.  That song is not catchy at all.) 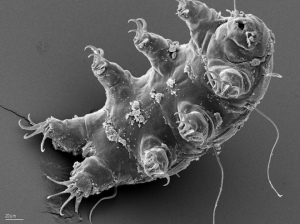 My gut tells me to deplore this creature, but my heart tells me otherwise.

I hate microscopic creatures.  The macroscopic creep me out.  But Tardigrades might have changed my mind.  And not just because they’re called waterbears or moss piglets, which make them sound cute… 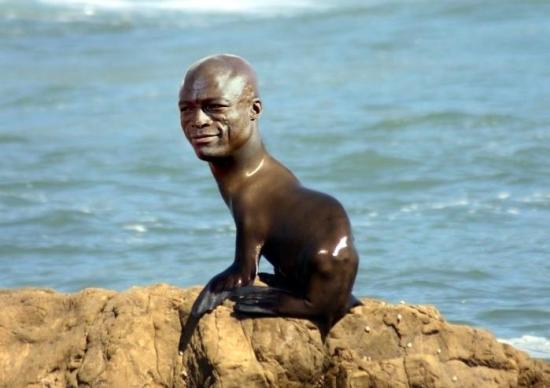 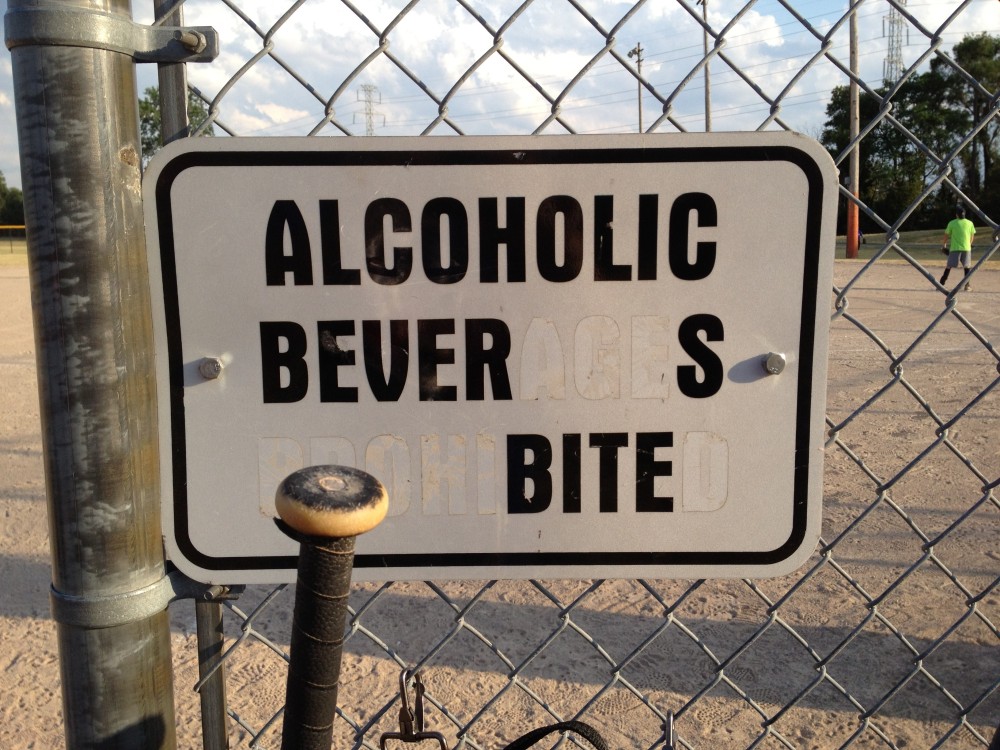 So okay, there’s only two, which you might think isn’t A Handful Of anything.  But if you ask the Khaleesi, she might tell you otherwise… 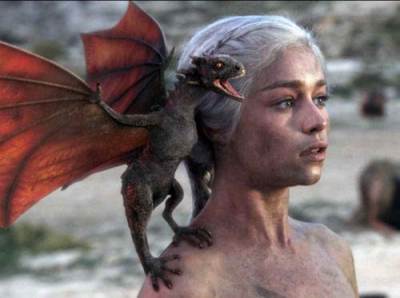 SIDEDISCLAIMER: This is a dumb idea I’ve had for a while now.  Deal with it. Below you will find A Handful Of Movies That Are Not Sequels To Other Movies.  Why am I doing this, you might ask?  My answer: education.

One wags, while the other swayze.

Black Dog is an action picture about an ex-con being tricked into smuggling illegal arms. White Dog is a movie starring Kristy McNichol around her ABC School Specialdays, and oh yeah – it’s about a racist dog.

The themes of the films form some kind of mental Mobius strip. Better yet – Ouroboros… the snake that eats its own tail.

Despite nobody having a clue about either sex (sorry Steve Harvey – not all men operate on such basic levels, and sorry to all involved with What Women Want – women never know what they want), these films might as well be science fiction instead of comedies.

I miss the days B4 B9 shit like this was made.

Sure, both are based on board games, but whereas Clue: The Movie was clever, Battleship is sunk by getting handed scrap footage from Transformers 3.

And somewhere in the middle sits The Nanny Diaries.

This one’s just dumb.  Moving on… 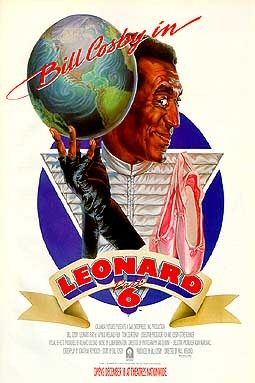 Bill Cosby, you weren’t fooling anyone.  Nor making them laugh.  Not even getting a smile, really…

Once upon a time (not ABC-Disney’s eponymous show), Tim Burton and Don Bluth were a part of the Disney family.  Coincidentally (Coinkidinkily), one of the last projects they shared parts of was The Black Cauldron (Burton designed the The Horned King;  Bluth animated a few uncredited scenes).

Anygurgiwantsmunchiesandcrunchies, they share one other similarity: a fascination with dead dogs (not really).

SIDENOTE: A Coinkydonk , too?  Why is this an Awful Battle?  Read on.

In 1984, the last thing Burton made for Disney was a short film called Frankenweenie.  This lead to him getting fired.

As for Bluth, All Dogs Go to Heaven ended his short streak of hits.  Even though it developed spin-offs, it was mostly a flop following the highly successful An American Tail and The Land Before Time films.   (RIP Judith Barsi)

Now that Disney and Burton made peace over the stop-action Nightmare Before Christmas and live-action Alice in Wonderland films, he’s flipping the script on his newest film:

Why does it seem even creepier animated than the original which was live-action?!

Perhaps the alternate isn’t much better: