Anywhoppers, it appears to me we’re going the way of the Japanese.  Not in terms of soda flavors:

But in the way that they are smaller than our 20 oz. versions and cost a fair amount more.

Our Twix’s and Chips Ahoy!’s and Milky Way’s and Oreo’s are exponentially shrinking in size maintain a lower price point.  This site details the trend without any additional references, while this site supplies information they acquired from the Hershey Company (I’m highlighting only key moments):

By this rate, I fear one day all my favorites will be way smaller than I remember, and cost way more than I’d care to pay. 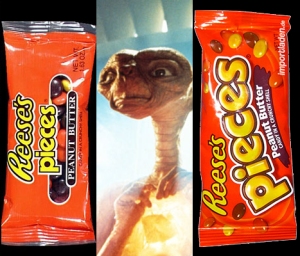 What do they cost on E.T.'s Garden Planet?

Are Reese’s Pieces the sign of the apocalypse? Can they in fact be the proof in the pudding?  (Actually, Reese’s Pieces in vanilla pudding sounds really tasty.)  Let’s have a look…