I might have had a million dollar idea In My Brain While Sleeping.  Consider this posting my poor man’s copyright.

In this dream, I happened to be in the toy section of a department store (surprise), and on one of the end caps I saw new candy display.

Bright blue bags of what appeared to be M&M’s filled the pegs, but they were called something different:

It was a new candy/trading card-type game, like Pokemon or Yu-Gi-Oh!  Basically, it was played like so… 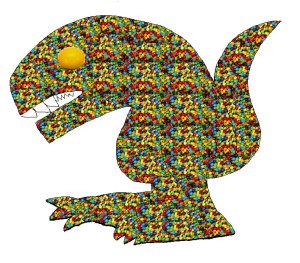 (Not So) Artistic Representation of the "eMnivore"

The entire concept would be a branching out against of the proconceived notions about M&M’s, much like how Bionicle expanded Lego’s brand.

And they game would be replayable!  You’d send in wrappers to get actual trading cards, and there would even be chasers – those rare wrappers with exclusive characters.

Once kids have the first series, others would follow.  When new battles were waged, players would grab random handfuls of M&M’s, so future sales would remain stable, and possibly increase.

The only setback I see is parents of fat kids blaming em-em-oh’s! for their children’s woes.

My response to that: at least they’re playing with their food before eating.