In the early 90’s, I had my musical awakening, if you will.  My tastes might not meet the standards of most high-brow music snobs, but those years should be celebrated merely for opening my eyes ears.

Here were some bands that I quickly attached to, and somehow just as easily detached from.  Was it a demise in the quality of their music?  Did they grow beyond me?  Did I grow beyond them?  Or did I simply stop caring?

It’s final season is days away, and the anticipation of it is killing me.  Not literally.  It’s killing me kind of like how people get killed on LOST.  That is, what the fuck is going on in that show?

Anywidmore, when the show began airing in 2004, only a couple of the cast members were familiar faces.  If you happen to have a photographic memory, these Actors! would have been familiar as well.

This first clip is an old Old Navy ad.  Keep an eye out for Fran Drescher, Oprah’s Stedman, and… Josh Holloway (Sawyer).

This second video is a commercial for the phone sex live chat line, LiveLinks. If I knew I could talk to Evangeline Lilly (Kate), I might have called.  What do you mean you don’t get to talk to the girls on TV?  What kind of operation based on lies are they running?

Remember the old game show, Russian Roulette?  Well, Jorge Garcia (Hurley) has been trying to forget about it.  (Purely my speculation based on unfounded made-up facts.)

BONUS: Besides Matthew Fox (Jack) and Dominic Monaghan (Charlie), and maybe Harold Perrineau (Michael) and Emilie de Ravin (Claire), Terry O’Quinn (Locke) should have been a familiar face, courtesy of his creepy performance in The Stepfather. 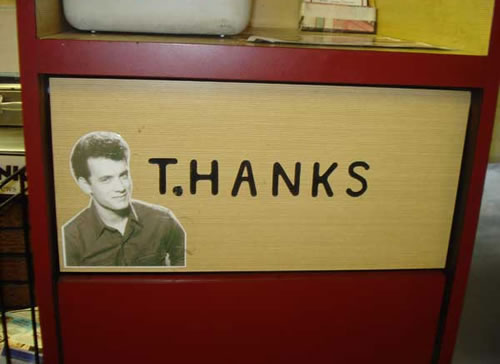 Noooo, that should pretty much do it.

Sometimes I find too many websites that make me happy.  Today, I found four.

1) WTF Comcast – Who writes these summaries?  Who cares?  They’re hilarious and strange, and collected on this website. 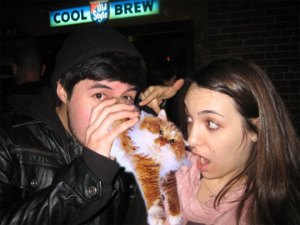 "Chug! Chug! Chug!" they all chanted. Because Chug was the cat's name, you see.

3) Sexy People – This picture says it all.  But if you need to hear more (if this portrait didn’t, in fact, “say it all”), check out this website.

I think I used to have the same wallpaper...

4) 100 Things I Learned – Films have a lot to teach us.  For example, here are some things people learned from watching Transformers: Revenge of the Fallen…

#6 – Michael Bay will always stress that when teleporting from America to Egypt, it will still be the middle of the afternoon.

#13 – If a Transformer saves your life from an incredibly dangerous situation, instead of thanking him, tell him you’re completely safe now and that you don’t need him anymore.

As that guy who played Ferris Bueller said in one of his movies, “Life moves by pretty fast.”

A fellow blogger pal recently posted about the same thing, and in her articulate reflection, she paraphrased something she heard Keith Urban say on the radio:

So when I stumbled happened upon this chart, displaying the exponentially growing number of Crayola’s crayon colors, I was taken aback.  How can there be so many colors now?

When I was a kid, I remember being amazed there were sixty-four colors.

Anybody else have a penchant for turning this into a missile launcher?

It’s true that as adults, we make things more complicated for ourselves.  Should it be that way with the simplicity that is colored wax?

Then I stumbled happened upon this graphic representing the last decade.  It kind of gave me hope in the sense that the more things change, the more they stay the same.  So I was cheered up again.

Then I stumbled happened across this:

"Sunny days, sweeping the clouds away..."

In the words of one of those characters in those kids’ cartoons and books about Eeyore, “Oh bother…”

Let’s examine for one second which car companies sponsored which, um, sponsorees…

Eight years ago, Ford Motor Company decided to back a show that was not much more than a flashier Star Search.

Turns out it doesn’t matter.  Once Kelly Clarkson happened, American Idol legitimized and therefore blew up.

Speaking of blowing up, let’s remind ourselves which guys GM got behind (or as in the case of this image – between):

And in the end, which car company required money from the government bailout?

The quest begins to pinpoint the moment that John Cusack went from being The Shit to becoming sort of Just Shitty.

In the annals (ha!) of this category, it is not necessarily a title one’s locked into and therefore it’s totally reversible.  With his upcoming films Hot Tub Time Machine and the possible Cosmic Banditos, the turd that has become his career could shine once again.

But what caused the descent into the drain?  Let’s take a trip in the Toilet Bowl Time Machine to find out.

There are groupings to this phase, and they go like so… 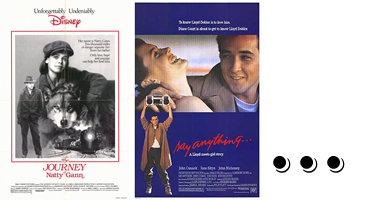 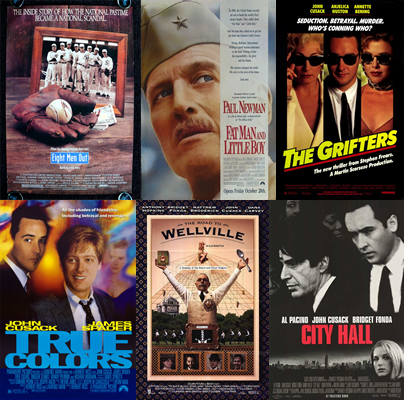 7) The Beginning of the End of the Century

Some would argue that 2000 was the end of the era of his best work.  (Okay, at least I would argue, and then blame it on Y2K.)  But in 2005, John Cusack started blogging for The Huffington Post.  Then came:

How in the heckster did this guy:

I guess it’s kind of like how this happened:

30 Rock, oh 30 Rock, how much do I love thee?  Apparently enough to dream about you on more than one occasion.

Or at least this guy:

In this particular brain drain, I was spending Christmas with the Jordan family.  I had bought Tracy Jr. a guitar, and I couldn’t wait for him to open it up so I could play it.

Once dinner was finished, he opened it and I helped put the guitar together (because for some reason, assembly was required).

Somebody 30 Rocked this guitar.

Once I tuned the six-stringer, I readied to strum.  But he wouldn’t let me.  Even after I reminded him that I bought it for him, and that I put it together, he still shook his head, arms outreached.

I handed it over, sort of peeved, and woke up.

DREAM INGREDIENTS: A late night helping of pizza sticks… and an episode of 30 Rock.

Drinking with friends is getting to be a problem common again, and ye of the TripleDoubleU get to reap the benefits.

This time around, another blog’s post was brought to my attention.  Namely, this headline from IGN:

Here’s one example shared by both the MTV reality show and the classic RPG:

But I’ll let you read the remainder of the list by clicking here.  You don’t have to be a huge fan of both to get it, but you should be a fan of at least one.

Now that same night, another major item (because Jersey Shore and Final Fantasy are like huge deals) brought to my attention was that these existed:

It's a "Somniosus microcephalus," duh.

Or in other words – the Greenland shark.

Now I’d like to list some facts about the Greenland shark, and how they too are similar to the cast of Jersey Shore. 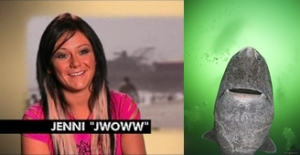 They could be friends, doncha think?

He is The Situation.

Sedna was a girl whose father cut off her fingers while drowning her. Each finger was said to have become a sea creature, including the Greenland shark.  (via Wikipedia)

Now that’s quite a situation.

BONUS THING NOT HELD IN COMMON: