Hey, gather ’round and let me tell you about a mid-season replacement…

Get this.. there are three guys… and they all went to college together… you see, that explains how they became friends… and then they all have significant others to varying degrees… begin ensuing hilarity!

That pretty much sums up the basics of two new shows – NBC’s Perfect Couples and Fox’s Traffic Light. 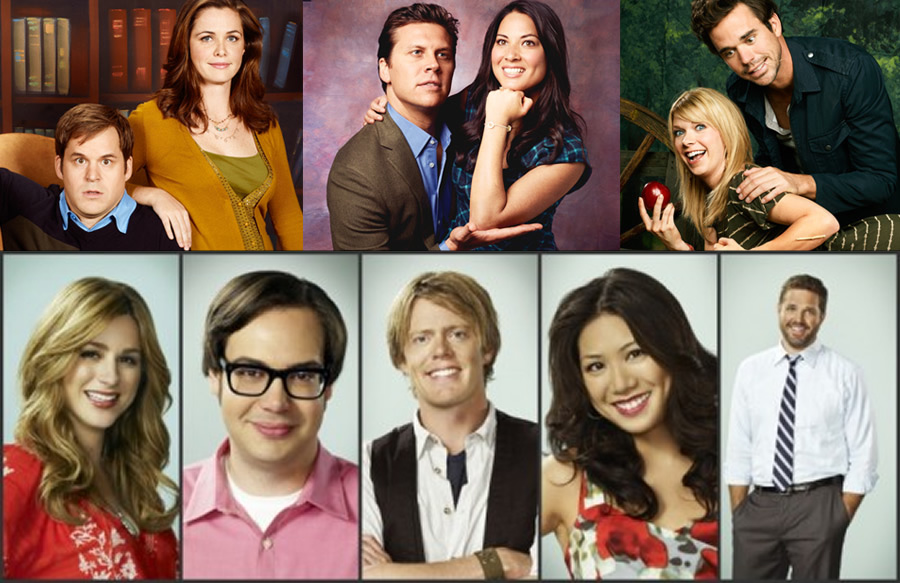 Light Couples and Perfect Traffic would be awesome.

Well, this isn’t an uncommon thing, especially in the world of sitcom manufacturing.  There’s a lot of a throw it at the wall and see if breaks through mentality that goes into producing hits.  So let me clarify…

On Perfect Couples, we get Mary Elizabeth Ellis (Amy/The Waitress) from FX’s It’s Always Sunny in Philadelphia.
On Traffic Light, you get both David Denman (Mike/Roy) and Nelson Franklin (Adam/Nick the IT Guy) from NBC’s The Office.

Well, come to think of it, that might be a bit off as well.  Howzabout…

Sure, one was made in America and the other in Britain, but David Walton (Vance) of Perfect Couples and Kris Marshall (Ethan) of Traffic Light both happened to be in TV shows called Heist.

BONUS COINKYDINK OR COINKYDONK!
Perfect Couples’ Kyle Bornheimer and Hayes MacArthur
(Dave and Rex) were in She’s Out of My League.

Olivia Munn (formerly of G4’s Attack of the Show, concurrently of Comedy Central’s The Daily Show) and Liza Lapira (formerly of Fox’s Dollhouse) both portray the better-half of the highest level relationships.  Munn’s Leigh is in the perfect couple; Lapira’s Lisa is in the red light couple.