When I was a little kid, back in 1983, there was a movie that meant a lot to me.  It was called Return of the Jedi, and it completed the Star Wars trilogy about Luke Skywalker.  The whole series was about him figuring out who his family was and who his friends were.  This guy was not one of his friends:

While that was in theaters, a new TV show started about aliens coming to Earth called V.  This lady was one of the visitors:

Last year, The Last Starfighter came out (which was incredible), and that film introduced us to this guy:

Doesn’t he look like he could be Nikto and Diana’s kid?

(SIDENOTE: The spaceships in The Last Starfighter were animated with computers, just like the vehicles in Tron.  I don’t think it will catch on, though.  The ships in Star Wars are waaaay better.)

Well, Grig might have another brother in this winter’s Enemy Mine:

All we need to do is find out Nikto or Diana’s last name… or Grig even.  Why don’t more aliens have last names? 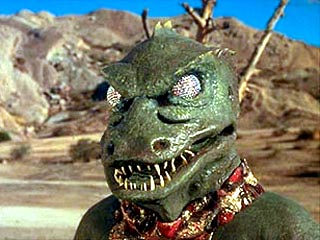 "Gorn is my last name. My first name is Leslie."