The smoking baby from Indonesia may not be the first of his kind, but he’s definitely getting David After Dentist level of media attention.

In case you have (somehow) missed it, the video (via Break) is… moved to after the jump due to auto-starting issues.

(SIDENOTE: I would have went with a YouTube video, but you can’t trust any of those to stay.  So now I’ll imagine you skipped ahead to the bottom of the page, or clicked on the above link, and I’ll be moving on.)

If you think that’s scary, then you haven’t seen this (via Cooley!):

Hmm, not working, eh?  Perchance a toy of Bat Boy might throw you for a loop (via Comics Alliance)? 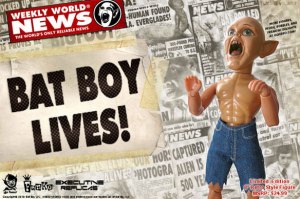 One more thing and I give up.  How about another misappropriation of a teddy bear? This time, it’s in robot form from Fujitsu (via Crunch Gear):

Smoking baby after the jump! END_OF_DOCUMENT_TOKEN_TO_BE_REPLACED