My brother caught this one and brought it to my attention…

Fran Drescher and Spongebob Squarepants share the same (or at least similar) annoying laugh.  If the proof is in the pudding, hopefully you enjoy marble and lemon meringue on your tongue.

THE MARBLE PUDDING (a chocolate and vanilla remix of a video I posted elsewhere…)!

THE LEMON MERINGUE PUDDING (because I like neither that flavor nor Mr. S.S…)! 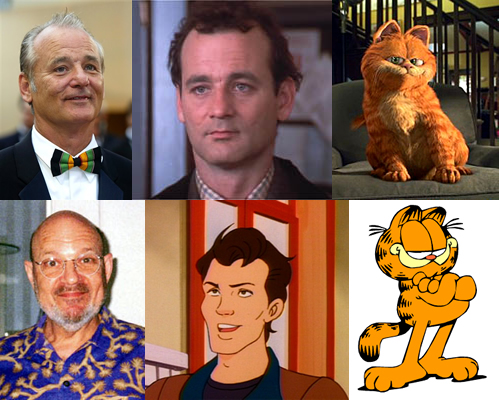 Since Lorenzo Music’s death, Frank Welker has often replaced him as the voice of Garfield the Cat in recent productions of the Garfield franchise… Frank Welker also provided the voice of Ray Stanz on The Real Ghostbusters, and Music… was replaced by Dave Coulier when Bill Murray complained to the studio that his character (Peter Venkman) sounded too much like Garfield.