An explanation may be required: Coinkydink = Coincidence & Coinkydonk = Not.  Happy now? 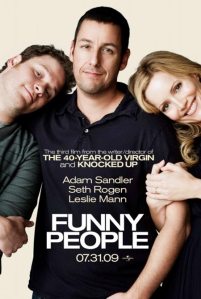 Since the previews were first shown for Judd Apatow’s “third film,” Funny People, I’ve had a feeling there was something a little more sinister going on behind the scenes.  Namely, I had a gut feeling Apatow might be seeking an Oscar nod.  Here’s the preview for anyone that doesn’t watch TV, have access to the TripleDoubleU, or go to the theater.  (Damn disabled embedding!)

Now I haven’t seen the film, and I don’t want to give away what I’ve learned of the plot, but believe me, it’s possible.  Apatow’s built himself a fairly sentimental/comical lineup, starting with television’s Freaks and Geeks and Undeclared, up to his directorial efforts, The 40 Year Old Virgin and Knocked Up.  If Little Miss Sunshine and Juno can get nominations, why not Funny People?

Then it occurred to me.  Robert Redford directed a little film back in 1980 that cleaned up at the Academy Awards.  Want to know it’s name?

So I ask you, loyal audience wandering clickers spammers anybody, is it a coinkydink or a coinkydonk?