Last night at trivia, we blew it.  We blew it big time.  Out of a possible 73 points, we had 65 – and that’s a rarity (high 50’s are usual).  We could have actually scored higher if I would have went with my gut instincts of Applebee’s (“Where did Plaxico Burress say he shot himself?”) and goat (“From what animal does cashmere wool come from?”), as opposed to Denny’s and sheep.

But the last question… it’s all political correctness’ fault.

Prior to President Barack Obama, who was the last African-American to be recognized as Time Magazine’s Man Person of the Year?

Person of the Year? As opposed to alien?

We didn’t think of this guy, because we didn’t go back in time that far: 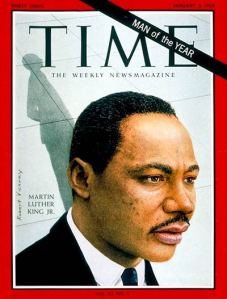 But in reality, African-American has become so synonymous with Black in this country, we didn’t even consider the American part.

Oh well.  We didn’t win even though we were in first place before the final question (you wager your points à la Final Jeopardy).  But I did steal a cool NFL glass from the bar.  It had all the team logos covering it.  Suckas!*

*KARMA SIDENOTE: When I was dropped off at home, I realized my wallet was missing.  I figured I had left it at the bar.  Since I planned on taking the glass pretty early in my drinking, I focused mostly on that task, and found it fitting I abandoned my Billabong billfold at the scene of the crime.  Turns out I dropped it in my friend’s car.  But for a second, I learned my lesson.