There is one song on this The Shit To Just Shitty list that was its inspiration.  It’s not inspiring by any means… it simply got me thinking.

So here’s my ranking of Songs About New York that I like, and how I really feel about them.

(SIDENOTE: The reason I’m writing about songs I like is because (1) it’s my blog, and (2) there are a lot of songs about New York, New York… sorry Frank.  Not one of my faves.)

Jay-Z and Alicia Keys kill it with Empire State of Mind, and in my opinion, it captures the essence of being in the Big Apple.  But the main reason this song is ranked so high is simple – this is the apology for most of the rest of the list.  Oh yeah.  Plus, street cred.

THE SHIT AROUND THE HOLIDAYS

The Pogues and Kirsty McColl’ Fairytale of New York is one of the most emotional Christmas songs I’ve ever heard.  It’s also fairly depressing.  Nonetheless, it’s great.

THE SHIT FOR BEING FROM THE 70’s

Simon and Garfunkel’s Only Living Boy in New York is one of those songs that you know is good… but damn it to hell when it gets stuck in your head.

CRAPPY IF NOT IN THE MOOD FOR

How is Suzanne Vega’s Tom’s Diner a song about New York? 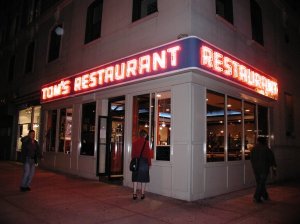 CRAPPY EVEN IF IN THE MOOD FOR

The Wallflowers’ 6th Avenue Heartache is not One Headlight, but I won’t hold it against it.  (I really like One Headlight.)

Here’s where the list really takes a turn for the worse.  Remember Disney’s Oliver and Company?  How about Huey Lewis’s Once Upon a Time in New York City?  Sorry for reminding you.

So wait… this isn’t the worst song on the list?  A tune from (another) Disney film no one saw, Newsies, is on my radar for songs about NYC.  What could be worse?

The inspiration for this post: Arthur’s Theme by Christopher Cross.  That’s the best that I could do?  You betcha.