Let’s face it.  Pick-up lines suck.  I recently asked a waitress at one of the gang’s usual spots what she thought of them.  My friend had a poor one that involved a vulgar nickname, whereas I tested the classic stolen by the movie Hall Pass:

How much does a polar bear weigh?  Enough to break the ice.

Cheesy as hell?  Yes.  Good?  Not really… but it’s nowhere near offensive is my point.

At this point, the waitress shared what she thought was a cute pick-up line.  I don’t know if it happened to her, and if it did, whether it worked, but here it goes… a guy hurries up to a girl holding something in his hand, and he says:

You dropped your name tag.

And he gives her this: 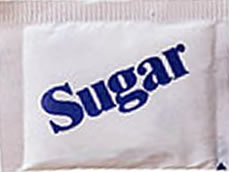 Stunned, we were.  (Talked like Yoda, we didn’t.)  Once she walked away, and the spirited conversation began.

Here are some alternates (WARNING! BY DEFAULT, THEY ARE NOT GOOD!):

I did this to my courage to talk to you.

I’m glad I was able to do this to you.

I’ll do this to the time we spend together.

I view you as this.

(SIDENOTE: This was our favorite from the night.)

SAY WHILE HANDING OVER: 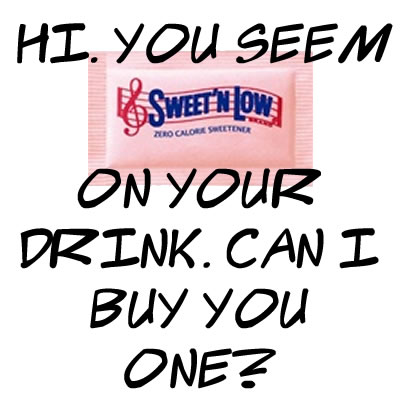 ACCEPTABLE FOLLOW-UP ITEM TO HAND OVER AS YOUR RESPONSE: 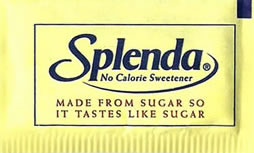 UNACCEPTABLE FOLLOW-UP ITEM TO HAND OVER AS YOUR RESPONSE:

I’ve come to Michael Bay’s defense once before.  I’m not going to do it again.

But I might have to find The Silver Lining in his decision to reboot the Teenage Mutant Ninja Turtles as aliens. 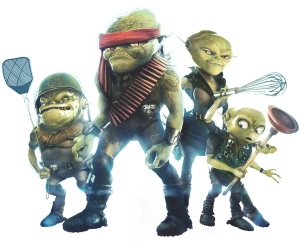 What good might I find in the seemingly asinine idea to change the beloved oozy origin of our pizza-loving, sewer-dwelling crime fighters?  Midi-chlorians, anyone? 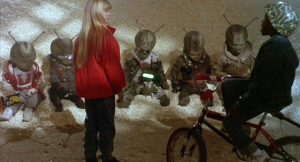 Sometimes such changes work.  In the Sam Raimi Spider-Man series, didn’t a genetically altered spider make a lot more sense than a radioactive one?  (Maybe not enough.  Part 3 did suck, and the new film is abandoning that concept.) 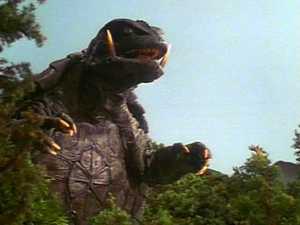 I think the best part is that we might finally get to see this guy: Krang. 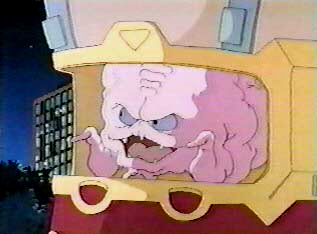 Four movies in, and the best baddies we’ve seen are these two? 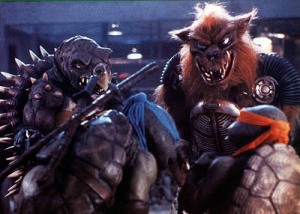 That’s at least my hope.  I can’t take any more Shredder nonsense… 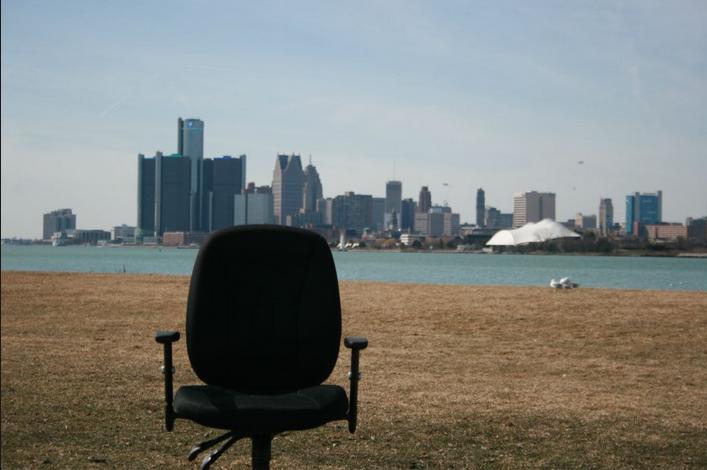 (via @whereismychair on Twitter.  Apparently some douchey teacher always complains about someone taking his chair.  In reality, the chair has a life of its own…)

There has been a lot of bro-haha over Topher Grace’s edit of the Star Wars prequels, which we, as a public, will never see.

That makes me sad.

This video makes me suicidal:

This Unofficial Trilogy is a special one.  It contains three theatrical treats, as opposed to DVD releases.  (It might be a bit misleading to say treats, but I liked the alliteration of it all.)

So how do they stack up?

Definitely the weakest of the bunch, and it’s a shame.  I had high hopes for this one despite its uninteresting previews, and I don’t even think the high hopes were what let me down.  Uneven pacing, too many plot points, no sense of wonder – these components were what let me down.  And it’s a shame, too.  This is director Andrew Stanton’s first foray into the real world.  He might be better off back behind an array of computers.  Compared to his Finding Nemo and Wall-E, John Carter doesn’t hold a CG-candle to them.

Often times, when cop comedies get stuck in their actual crime story, they lose some of their laughs (Hot Fuzz, The Other Guys, Police Academy series).  That is not the case with 21 Jump Street.  Adapted from a serious, and sometimes preachy, show, this flick is more about two buddies overcoming the differences in their past than anything else.  Who would have ever thought I’d enjoy a Channing Tatum film?

I don’t want to hype this movie up any more than it already is, but believe the hype.  This film is a winner.  I had no expectations or drive to see this film (since I didn’t read the books), and I think I was about an hour into it when I turned to someone with me and whispered:

I love this fucking film.

It might be too early to share this, but I’m looking more forward to Catching Fire (book two in The Hunger Games trilogy) than I am The Avengers.  And that’s saying a lot.

This post is a sort of double-whammy JusWondering.  The first part is a legitimate whimsical question; the follow-up is philosophical.  Hopefully both are fun.

The first real question that smolders in my, um, title line is

What other president should get rebooted?

Hollywood loves its reboots, re-imaginings, and remakes, and these upcoming films are proof.

You’ve probably heard about this first one by now – Abraham Lincoln: Vampire Hunter.  Here’s the preview:

But did you also know that FDR: American Badass! exists (or at least will very soon)?

If Hollywood followed these templates, I’d say George Washington or JFK are ripe for action-packed movies:

I’d venture to guess in another twenty years, Ronald Reagan will get rebooted, too.

Now onto my second JusWondering… does anyone else feel slightly offended by Abraham Lincoln: Vampire Hunter and FDR: American Badass!?  Because weirdly, I do.  And what’s stranger, I was born and raised Roman Catholic and these doesn’t bother me one bit:

It’s been a while since I’ve found a true Happy Find.  By that I mean I found a website or blog user that’s new to me and makes me happy.

This makes me happy (which is long overdue you horrible, horrible movie):

For the remainder of The Schwarzenegger Follies, you can click here.  You’ll find wondrous classics, such as Conan the Barbarian: The Musical and Predator: The Musical.

And because I’m so kind, here’s another called… Commando: The Musical.

So of course it’s natural that I would rediscover  Prince’s I Would Die 4 U while bouncing around the dial.

Then the thought occurred to me, could this be the first song that used leet speak in its title?

…and in 1990, Sinead O’Connor struck gold with Nothing Compares 2 U (which was also written by Prince)

But there was nothing sooner.  Or was there?

Now if I had actually done all this homework, I probably would have stopped at Prince’s I Would Die 4 U.  I wouldn’t have even delved to the album that preceded Purple Rain and 1999 called Controversy.  (Released in 1981, it had a song called Jack U Off.)  So does that make it official that Prince started leet speak since he has three of the earliest appearances of it?

In 1977, there was a funk band known as Graham Central Station, and they put out an album (and song) called Now Do U Wanta Dance:

But even better than that – the first song on the album is called:

Can we be sure PR1NC3 knew about Graham Central Station?  According to Wikipedia:

(SIDENOTE: Thanks to my brother-in-law and fellow blogger, Judd, for the research.  Check out his insightful site Pancake Dominion by clicking here (or over there —>)…)

When I lived in West Los Angeles many El Niño’s ago (or were they La Niña’s?), there were two songs that always sort of inspired me to move there: Sheryl Crow’s All I Wanna Do and Everclear’s Santa Monica.  Even though I didn’t live in the exact city of Santa Monica, I lived as close as those two songs were actually about the city (more on that in a moment).  It was their sound that encapsulated the vibe I was seeking, and they hit the gauge in the earlobe.

Anymalibu, it was a recent song I’ve heard that made me realize that there’s been A Handful Of Songs About Santa Monica, and here they are:

This is the song that launched this post, and if you listen to its words… you’ll have no idea what it’s about, either.  He’s talking about someone being tied up and screaming and the British army gets a shout out.  He sings of Santa Monica throughout, but it could be a person rather than a place.  Malinowski’s Canadian and in a reggae band, so… that’s no help.  But I like the song, anyway.

This one specifically talks about Third Street Promenade, which was one of my favorite places to visit, but it’s more about getting lost, or feeling lost, or losing yourself in a popular public place.  I never heard this song before writing this post, but man, is it depressing…

Do all these artists want me to slit my wrists with a long board, or what?  This one’s about a break-up that begins with a bed full of gasoline.  Whether it’s figurative or literal is beside the point.

Finally, an upbeat song!  Wait, what?  It’s really about attempted suicide?!  Plus, it was also temporarily banned from airplay after the attacks on 9/11?  Good gracious.

Man, I forgot how big of a crush I had on Sheryl Crow back in the day.  This song may not be about the city, but at least it’s a happy tune about urban ennui.  In other words, a rallying cry for day drunks on Santa Monica Boulevard.

Most Actors! have precious egos.  That’s why more often than not, they don’t like typecasting.

Now some Actors! benefit immensely from typecasting.  If they’re weird-looking, they play weirdos; if they’re pretty, they play pretty people.

Don’t tell me Julia Roberts or Brad Pitt weren’t playing Julia Roberts or Brad Pitt in most of their movies.  The only reason Julia Roberts won her Oscar for Erin Brockovich was because she played outside of her type.  She stepped (slightly) beyond her bubble (by showing pushed-up cleavage), just like Halle Berry did (by getting completely naked) in Monster’s Ball and Charlize Theron did (by looking ugly and getting naked) in Monster (those examples are Coinkydinks).

(SIDENOTE: I’m not sure what Sandra Bullock did except get cheated on…)

Anyboobs, Susan Sarandon has had a recurring character this season on 30 Rock.  She’s been playing Lynn Onkman, the former teacher and lover of Frank… or in a word – a pedophile: 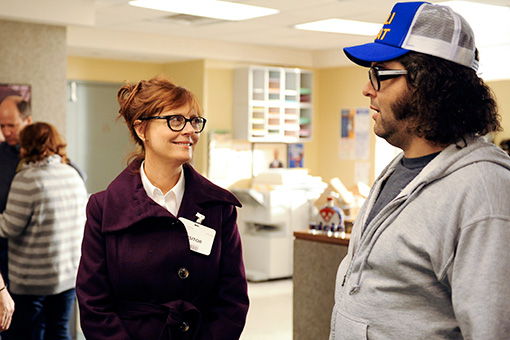 His hat should have read, "HOT FOR EACHER"... it's funny because the "T" fell off.

Where the Coinkydink or Coinkydonk comes into play is in Adam Sandler’s new movie, That’s My Boy, her daughter Eva Amurri plays – wait for it – a pedophile.  Or should I say teacher and lover?

BONUS FIND!  Though not in the preview, according to IMDb, Susan Sarandon is listed as third in the billing (she portrays her daughter’s character all grown up, ‘natch).

So is it all on accident (Coinkydink)?

Or is it a serious case of typecasting (Coinkydonk)?

Either way, Eva Amurri needs to be in more.