I didn’t always have a blog, if you can believe that.  This posts imagines what I might have written about when Austin Powers: The Spy Who Shagged Me came out… in 1999.

I can’t get the sequel to Mike Myers’ Austin Powers: International Man of Mystery out of my head.  This is the main reason why:

They were hilarious!  A clone identical in every way… just one-eighth his size.  But their odd pairing got me thinking, where have I seen this before?

Scrappy was Scooby’s  nephew, not a clone.  Nor was he really all that much of comic relief.  So maybe it’s not them…

There was no relationship between Garfield and Nermal, but at least Nermal was the color gray, like the good doctor and his clone’s uniforms.  And I might have thought the old comic strip was funny at one point.  But still…

Godzilla was the father of Minya, but he could have also been a nuclear reaction that was called “son.”  They were cute together, and Minya was about as useful as Mini-Me.  Let me think a bit more…

Kermit is Robin’s uncle, but their cut from the same cloth, literally.  Or should I say, the same felt.  Robin is similar to Kermit in every way, just one-eighth his size… and confidence.  Wait!  I’ve got it! 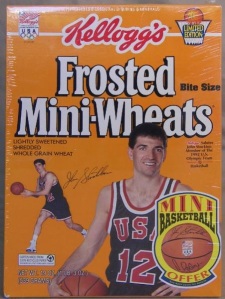 You should try Frosted Evil Wheats.