Has Cowboys & Aliens let you down?
Did Battle: Los Angeles and Skyline give you déjà who cares?
Still feeling blue after Green Lantern?
In Thor, the Norse gods are aliens, right?
Did you find Super 8 not so super great?
Did Transformers transform your apathy into a car?
What about Paul?  Did anyone see Paul?

So why am I asking about these films, you may be, um, asking?  They are the latest science fiction fare that brought aliens to the big screen.  And all of them suck.

Did the original Star Wars trilogy, Alien, and E.T. use up all the imagination when it comes to inventing extra extraterrestrials?  We’re talking not since 1983 here, folks!  Well, 1983 brought us Ewoks.  Some people don’t like Ewoks.

Here is (More Than) A Handful Of The Last Creative Aliens Of The Silver Screen (perhaps I’ll do a TV and video game one later)… and I’m not talkin’ ’bout ones that take human form, like Olivia Wilde in Cowboys & Aliens (oops – SPOILER!):

Okay, it’s a plant.  And it’s based on a musical based on a film from 1960.  But don’t try to convince me that watermelon-with-lipstick’s deep voice was expected. 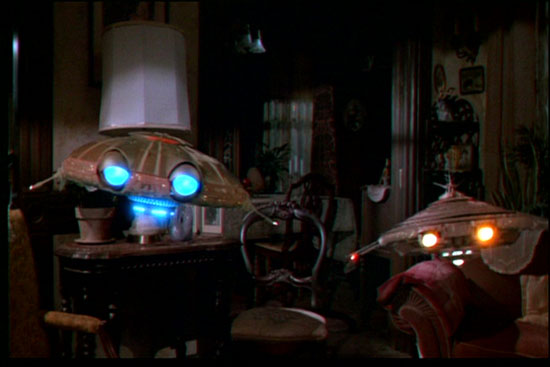 This one’s not too long after the rush of 80’s dreaminess.  But then again, they are basically small flying saucers.  Still, no one tried it before or since (until the inevitable CGI remake).

It took the concept of “all-things-penis” from H.R. Giger’s Alien designs, and ran with “all-things-vagina… and dreadlocks.”

Once again, not too far out there thinking on the surface, but in the end, still brilliant.  Shoot their noses!

Now we’re getting somewhere – mushroom aliens.  These creatures are memorable because of their surprise.  At first they look cute, but when you get closer, they get all see above picture. 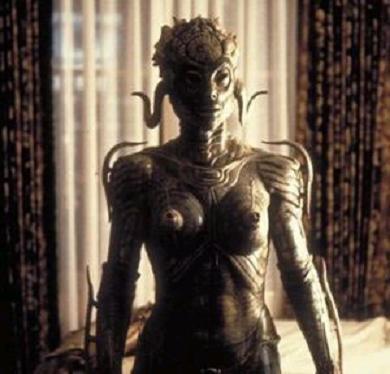 Ladies and gents – our first set of alien nipples captured on celluloid! 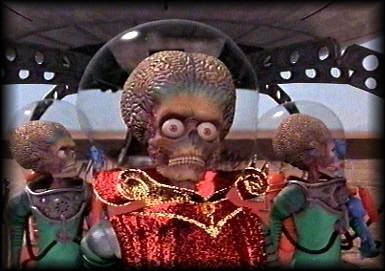 I shouldn’t have included them because they originated as characters on trading cards in 1962, and because they’re CGI, but I couldn’t include Kang and Kodos since they weren’t in The Simpsons Movie, so here’s my entry for aliens whose heads are in glass helmets.

Another one you could argue that I shouldn’t include, but she was new for the movie, whereas the Borg (which are awesome), were not.  And that’s why the Queen gets a shout out.

Definitely the best alien of the new bunch from a long time ago, in a galaxy far, far away.  He’s one of the few that benefited from being CGI.  Plus, he was a part of one the best sequences in the prequel trilogy (IMHO).  Was he only cool because he walked on his hands, and used his feet to do everything?  Shut up. 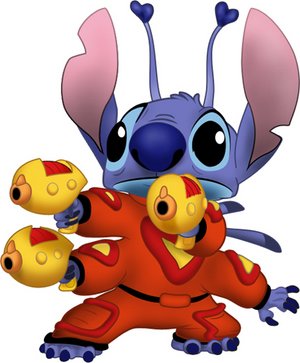 I couldn’t have ended on a better alien.  Probably my favorite alien since E.T.  Or at least since the one with the nipples.