This is an Unofficial Trilogy I would never brag about, but I have to recommend. 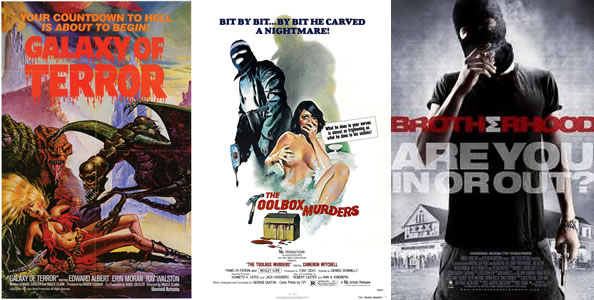 One of these won't leave you feeling icky.

This Roger Corman classic is known primarily for three things:

It’s because of #3 that I loathe to recommend it, but it’s story ended up impressing me slightly (because my expectations were so low).  Hence, the B+ ending.

This one starts off so stupid, I barely paid attention to it.  But there were two scenes that made me take notice:

Group those in with the ending, and I say, it’s kind of worth watching if you like stupid slasher films.

This is the respectable one in the bunch.  It’s about a fraternity prank that goes very wrong,  similar Very Bad Things.  It’s fairly believable, and it ratchets up the tension quite well.  Then there’s the ending!  Use this one as a palette cleanser.