I should give up.
I make so many mistakes when it comes to modern music that I should be ashamed of myself.

But I won’t give up.  And I won’t be ashamed.  Especially not because of this.

Let’s sidestep the fact that I’ve had a long-standing confusion over which songs are by REO Speedwagon and which are by Jefferson Airplane/ Jefferson Starship/ / Starship (this also happens to me with Genesis and Phil Collins solo, which is probably fair).

But it was recently brought to my attention that Starship’s biggest hits were not performed by a duo of men, like Air Supply…

Making Love Out of Nothing at All

…but of a dude and a lady.  The dude was Mickey Thomas; the lady – Grace Slick.

So my next mistake was thinking this was Grace Slick: 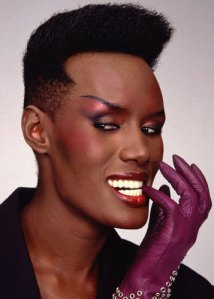 For the record, I did not think this was Grace Jones:

So from here on out, with grace, I shall never forget.
Got it, slick?

(SIDENOTE: Check out Grace Slick’s Starship video repertoire is after the jump.)
END_OF_DOCUMENT_TOKEN_TO_BE_REPLACED