These monkeyFLASHmonkeyBACK entries are examples of posts I might have written in the past had there been any technology other than corded remote controls, microfiche, and record players available.  This one is about a Billy Joel song I’ve only recently heard for the first time that deals with the topic of phone sex, a.k.a. not mastering your domain.

I also need add the fact that I was a good Catholic kid.  As proof of my reverence, I remember listening to Beck’s Odelay! on my Walkman for the first time, and literally throwing the headphones off because I thought it was devil music.

It’s not like my parents were super-religious or anything either… although I do remember my dad not being too happy with Olivia Newton-John’s Physical and Huey Lewis and the News’ I Want a New Drug.  But that was just a father looking out for his kid.  It’s not like any parents let their offspring listen to artists like Nicki Minaj or Flo Rida these days…

I’m a huge fan of Billy Joel.  I grew up listening to An Innocent Man on LP, and his greatest hits collection on cassette.  Can you imagine my surprise when I heard a new old song by him playing overhead at Kmart?  I figured out it’s called Sometimes a Fantasy, and it goes a bit something like this:

While at Kmart, I looked through all the cassettes trying to find which album it was on.  I finally figured out it was on Glass Houses which came out in 1980.  That’s the record You May Be Right, Don’t Ask Me Why, and It’s Still Rock and Roll to Me were all on.  I asked my mom if I could get it, but she said I already had enough of those songs on the greatest hits collection.  It would be like throwing money away.  I begged and begged, and finally she let me get it.

As soon as I got home, I ripped open the plastic, cracked open the cassette, and popped the tape in my boombox.  I was going to fast forward past You May Be Right, but I waited through it.  I listened to it once, then rewound it to get the lyrics.  I paused it after every line so I could write it down.  And you know what it was about?

Using your imagination!  I play by myself all the time using my imagination, and now my favorite musician has sung a song about it!  What a great day!  May 13, 2002 will live on in history! 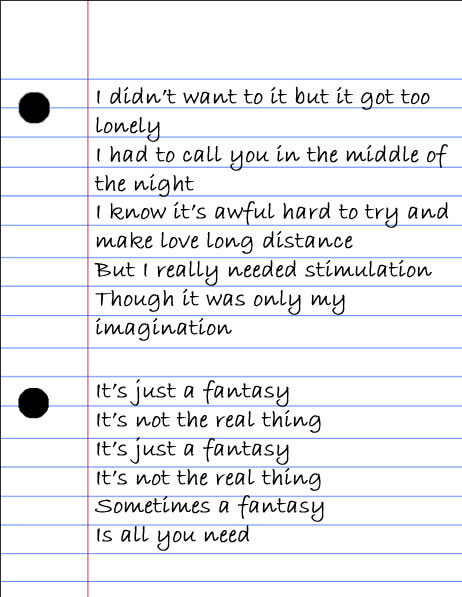 (Not So) Artistic Representation