This is why I travel.  Oh wait.  Am I supposed to film every step of the way?

Ah, true love.  Does it really exist?  Is it simply a term to describe a reaction of gurgling chemicals and snapping pheromones?  Is it phenomenon that only occurs when soul mates find each other?

The governor of South Carolina, Mark Sanford, certainly believes in it.  You know this guy… he disappeared for a few days and spent them with a woman other than his wife.  Chemicals and pheromones?  Soul mates reuniting?

This [relationship with Maria Chapur] was a whole lot more than a simple affair, this was a love story. A forbidden one, a tragic one, but a love story at the end of the day. (NYTimes.com 6/30/2009)

Hopefully these two videos can offer up some answers.  The first video falls a little more in the chemicals/pheromones camp, and it captures the lust of that definition of true love.  The second video is the greatest expression of what happens when two soul mates lose each other.

In all actuality, no they don’t.  This is an AWFUL BATTLE… GO!

SIDE NOTE: The next video is a little long, but once you get the gist of the first five minutes (it’s a love story to himself… he smiles every time the song mentions it… hmm, I wonder why she left you?), skip to the 5:00 minute mark for the finale.  Priceless!

My parents both grew up on Motown.  It’s not odd or unlikely, but it explains why they never got into any of the Woodstock (hippie) fare, or harder rock like the Stones, the Who, or the Doors.

So growing up, it was radio-friendly for me… Lionel Richie, Hall & Oates, Air Supply (my dad loved them), and the G.O.A.T. – Billy Joel.  I remember the disdain the ‘rents had for Huey Lewis and the News when the (awesome!) group released, “I Want a New Drug.”  They never censored me from it, but they let me know they “weren’t crazy about it.”

The reason I say all this: I’m a sap for sappy music.  I get lost in your eyes in pop drivel, and I can’t help it.  There’s a radio station here that used to play soft rock at night (complete with love song dedications and a nightly wish… you must click here to hear!) and I remember being a teen, driving home from my first job at a toy store, listening to Alan Almond’s Pillow Talk while it was snowing the biggest flakes you’ve ever seen.  (I may be the biggest flake ever seen, but I digress…)

This quote from John Cusack’s (well, technically Nick Hornby’s) High Fidelity sums up my worldview it a nutshell, possible emphasis on nuts or hell:

What came first, the music or the misery? People worry about kids playing with guns, or watching violent videos, that some sort of culture of violence will take them over. Nobody worries about kids listening to thousands, literally thousands of songs about heartbreak, rejection, pain, misery and loss. Did I listen to pop music because I was miserable? Or was I miserable because I listened to pop music?

So why oh why am I bringing this up now?  Namely, due to this young lass: 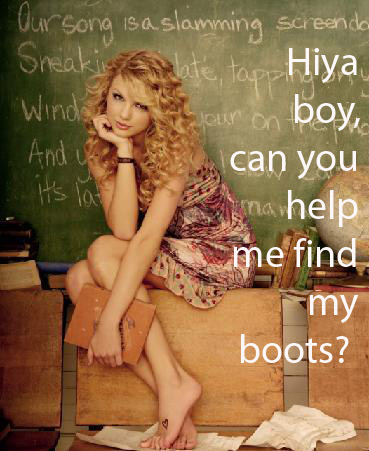 She has a new little ditty making the rounds on the airwaves, and as I listened to it I realized something.  Well, take a listen if you’re unfamiliar with her work:

What I’m slowly coming to terms with is, ugh… it’s a slow process.  This 19 year old country gal that writes her own songs DREAMS THE SAME DREAMS I DO*.  And that sucks, I guess.

So in other words… GRRRRR ULTIMATE FIGHTING!