Let’s get right into business, since this is overdue.

Two and a Half Men wasn’t Sheen and Cryer’s first shindig together.  That would have been 1991’s Hot Shots!

Everyone's thinking - "You were in that movie?"

Sheen and young co-star Jones each appeared in two different movies with the same title.  Can you guess?  No peeking below–too late.

Everybody already knows that Sheen replaced Fox on ABC’s Spin City.  But did you know that Fox had it in his contract that should he leave the show, he’d still get paid?  And did you know that Sheen had this same “Michael J. Fox Clause” in his own contract?  You did?  Okay.  Then did you realize that Sheen’s character in the Wall Street films was named Bud Fox?  Is that enough of a Coinkydink or Coinkydonk for ya? 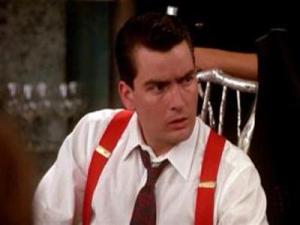 He should have said he has "fox blood" instead...