As that guy who played Ferris Bueller said in one of his movies, “Life moves by pretty fast.”

A fellow blogger pal recently posted about the same thing, and in her articulate reflection, she paraphrased something she heard Keith Urban say on the radio:

So when I stumbled happened upon this chart, displaying the exponentially growing number of Crayola’s crayon colors, I was taken aback.  How can there be so many colors now? 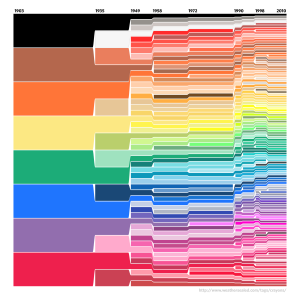 When I was a kid, I remember being amazed there were sixty-four colors.

Anybody else have a penchant for turning this into a missile launcher?

It’s true that as adults, we make things more complicated for ourselves.  Should it be that way with the simplicity that is colored wax?

Then I stumbled happened upon this graphic representing the last decade.  It kind of gave me hope in the sense that the more things change, the more they stay the same.  So I was cheered up again.

Then I stumbled happened across this:

"Sunny days, sweeping the clouds away..."

In the words of one of those characters in those kids’ cartoons and books about Eeyore, “Oh bother…”